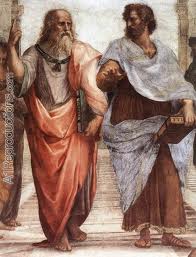 The history of humankind offers a wealth of inspiring examples of the intellectual and artistic achievement, passion for exploration, and triumphs of talent, spirit, and character.

The first unit of the course,  A Life Worth Living: Humanity’s Ideals, introduces a diversity of ideas and traditions: we explore the Socratic vision of “the examined life” guided by reason and personal integrity; study Aristotle’s doctrine of virtue and good life; engage with the late Hellenistic and Roman traditions of the Epicureans and the Stoics.

These classical works speak eloquently of virtue and happiness, pleasure and honor, self-knowledge and self-control. The Epicureans praise a simple, happy life free from bodily suffering and mental anguish. The Stoics emphasize self-mastery and deep appreciation for life’s “natural laws.” All our troubles, according to the Stoics, are rooted in destructive emotions and hasty judgements: “when we are upset or distressed, let us never blame someone else but rather ourselves, that is, our own judgments,” writes Epictetus.

In the twenty-first century, as in ancient times, we continue to ask: What makes life worth living? Should we quietly accept our limitations and misfortunes or should we try to change ourselves and our circumstances? Is life a constant struggle? If so, to what end?

Both the Stoics and the Epicureans invite us to think about what it means to live the natural way. Their quest echoes the Taoist teaching ascribed to “The Old Master” Lao Tzu who believed that virtue is to be found in non-action. The magnificent Tao Te Ching speaks of the origin of all things–the Way (Tao) which “never does anything, yet through it all things are done.”  The ideal human life is a life attuned to the natural order of the universe. And a true master is not the one who bends reality to his will but who “acts without expectation, succeeds without taking credit, and does not think that [he] is better than anyone else.”

Worlds apart from the Taoist ideal of non-action and universal interconnectedness of humanity and nature, the great European Renaissance movement places human beings at the center of all creation. Oration on the Dignity of Man by the Renaissance humanist Pico della Mirandola captures this spirit perfectly: humans possess freedom of will and action; they fulfill their glorious destiny while transforming the world, achieving great things, and conquering nature.